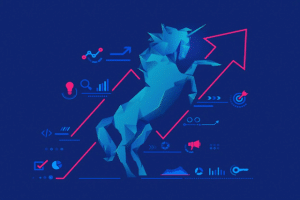 The word, of course, refers to a privately held startup company with a $1 billion valuation. Some of the major companies in the space, such as Instacart, Canva, and SpaceX, are familiar to you.

Unicorns were not nearly as abundant as they were before the Covid-19 pandemic began in 2020 and 2021, when the name was first popularized in 2013.

During the epidemic, venture capital investment activity increased dramatically, resulting in a significant increase in their numbers. But how did we get to 1,000 unicorns in the first place?

The Unicorn Population Before The Boom

In 2021, 340 startup enterprises will have achieved unicorn status. According to new study, there are now more unicorns than there were in the prior five years combined.

This spike in unicorns is due to two key factors: increasing venture capital activity and the pandemic.

The birth of unicorns is mostly due to venture capital funding. The word “venture capital” refers to money raised by startups in the form of financial, technical, or managerial help.

Individual investors, investor groups, investment banks, and other financial institutions are the most common sources of VC funding. In exchange for financing, investors usually expect some equity. Startup founders must weigh the risks and benefits of selling their company’s stock to a venture capitalist.

Other factors have contributed to the unicorn flood, with the pandemic being the most prominent. As a result of the Covid-19 epidemic, interest rates have fallen and overall investment expenses have dropped. As a result, not only has there been an increase in overall investing activity, but there has also been an increase in interest in non-traditional investment approaches that may provide higher returns.

Venture capital has long been a popular tool for investors to make non-traditional investments. Experienced venture capitalists hunt for startups with the greatest growth potential to make the most out of their investments.

The expansion of these $1 billion-plus private companies was fueled by a combination of low interest rates and substantial venture capital investment activity in 2020 and 2021.

The three industries with the most unicorns are:

Many unicorn firms’ product offerings incorporate software or an application. As of 2021, the United States has the most unicorns, while China has the second-largest number. The majority of unicorns in the United States are found in California, with New York ranking in second.

Many new unicorns have been minted as a result of the unicorn boom in 2020 and 2021.

Here are five newly minted unicorns, along with their investment sources and growth prospects.

Miro (Internet software and services) is a virtual whiteboard and project management software. Collaboration software like Miro is essential for many firms that still work remotely. It is presently valued at $17.5 billion, with capital coming mostly from Accel, AltalR Capital, and Technology Crossover Ventures.

Gemini (Fintech): Gemini is software that makes bitcoin trading simple. Gemini was created in late 2021 and has grown in popularity as bitcoin has grown in favor among investors. As of 2021, the company is valued at $7.1 billion. Morgan Creek Digital, Marcy Venture Partners, and 10T Fund have all provided funding.

RELEX Solutions (Supply chain and logistics): RELEX provides artificial intelligence (AI) solutions to retailers all over the world. The company is a pioneer in the field of retail optimization. It was only recently designated as a unicorn in February of this year, and as of early 2022, it is valued at $5.7 billion. Blackstone, Technology Crossover Ventures, and Summit Partners are among the investors.

Noom (Health): Noom is a software platform that employs science to assist people in gaining control of their physical and mental health. It is gaining popularity as more people become aware of its advantages. Noom was declared a unicorn in 2021 and valued at $3.7 billion at the time. Qualcomm Ventures, Samsung Ventures, and Silver Lake have all invested in Noom.

Flink (eCommerce): Flink is a supermarket delivery service established in Germany. Since the outbreak, the demand for supermarket delivery has increased dramatically. Flink received money from Mubadala Capital, Bond, and Prosus Venture and is valued at $2.85 billion in 2021.

These are only five of the hundreds of unicorns that have been created in the last two years.

Looking Ahead To A Post-Pandemic Economy

While the rise of unicorns over the previous two years has been tremendous, this trend is not expected to continue. Many unicorn companies, particularly in the tech sector, have been overvalued, resulting in venture capitalists not receiving the returns they expected. In fact, one out of every ten unicorns is thought to be overvalued. When businesses become public, their ideals become more exposed.