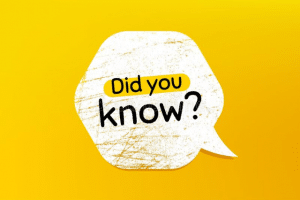 When we think of business, we can imagine giant organizations, sole proprietorships, or small businesses; we might imagine the American Dream and working hard to create a quality product. Most importantly, we consider money, which is the foundation and objective of practically every business ever established. What we don’t usually consider is how business has shaped our history and how business has shaped our history. The following eight historical business facts you probably didn’t know until now demonstrate how history and business are inextricably linked. Major business actors have opportunities to shape history, and innovators have opportunities to take advantage of historical conditions.

Edison did not create Hollywood in any way. His company, Motion Picture Patents Company, held film camera and projector patents, allowing it to dominate the early film industry. In essence, MPPC could use exorbitant license fees or patent infringement litigation to shut down any undesired studio productions and decide which cinemas might show which films. Many independent filmmakers fled the East Coast for Southern California in the early twentieth century because MPPC hired enforcers to actively police the use of its patented technology; the area proved to have excellent weather and access to great film locations, but the migration was made in large part because Edison’s patents could not be enforced in California.

Of course, Edison wasn’t perfect: his company was the first to regulate film screening rates, allowing cinemas to screen pictures based on quality rather than cost.

2.  Albert Singer did not invent franchising

When he licensed other companies to sell Singer sewing machines in the 1850s, Singer is often credited with inventing the franchise business model. Singer, on the other hand, did not invent franchising; much like Henry Ford did not invent the automobile, but rather a way to make its production more efficient and affordable to the masses, Singer revolutionized the world of retail by formalizing franchise agreements with other companies that allowed them to profit simply by marketing and carrying Singer products.

So, who is the inventor of franchising? It’s impossible to say; nonetheless, historical documents show that individuals were granted the privilege to sell specific commodities at some Medieval fairs in France. German producers later gave taverns exclusive rights to sell their most popular beers.

The establishment of mega-retailer Wal-Mart in 1962 signaled the beginning of a new era in not just retail retailing but also cities across the country. The number of single-store businesses fell by more than 55 percent over the next 40 years. The majority of those that survived relocated to strip malls, frequently near major retailers like Wal-Mart. As stores left or relocated to greener pastures – literally, as the malls that housed them sprouted up on the fringes of residential neighborhoods and in the suburbs – once-bustling Downtown USA became a network of abandoned storefronts. Small towns that have managed to keep downtown retail sales are now frequently considered tourist destinations, with art and antiques mostly catering to that audience rather than to local inhabitants.

In 1937, brothers Richard and Maurice MacDonald started the Airdrome, a hot dog stand in Arcadia, California, which they later relocated to San Bernadino and renamed McDonald’s Barbecue. The brothers had a profitable business, but they were always looking for ways to improve. In 1948, they took a bold step by momentarily closing and then reopening with a fresh menu of hamburgers, fries, and milkshakes. The assembly line approach was also used to fast food. The brothers’ gambles paid off: they were able to open nine more locations and sell 21 franchises before selling the entire company to franchisee Ray Kroc.

Kroc is rightfully credited with establishing the McDonald’s empire; nevertheless, history should not neglect the MacDonald brothers’ crucial actions. They’re the ones who laid the groundwork for McDonald’s success by recognizing opportunities and incorporating strategic “production” and sales/franchising strategies, as well as demonstrating the importance of the end game, or big prize: they sold McDonald’s to Kroc for $2.7 million in 1961, which is now worth $21.5 million.

Green bean casserole is so common at Thanksgiving dinners that it’s easy to imagine the Pilgrims presenting it at the First Thanksgiving. However, the Campbell’s Soup Company invented the recipe in 1955 in order to increase soup sales. The corporation formed a team to develop an easy recipe using components that most Americans have on hand. The result was a green bean and cream of mushroom soup (Campbell’s, no less) combination that rapidly became a Christmas favorite, pleasing both cooks and guests.

The Campbell’s/green bean casserole tale is a great example of providing value to customers and seeing how that value leads to greater sales. It’s also an early example of a “viral” campaign, in which word went from home to home until everyone in the country understood what green bean casserole was and how to make it.

6.  Zildjian: from 400-year-old sounds of war to easy listening

Zildjian, the world’s most famous cymbal manufacturer, was founded in 1622 near Constantinople. Avedis I, the company’s founder, was an alchemist who was working on a means to transform less valuable metals into gold. As a result, he invented a secret procedure for treating metal alloys that allowed them to ring for a long time while remaining damage-free when struck. Sultan Osman II learned about the cymbals and used them not only in his bands and festivities, but also in war to frighten Ottoman adversaries. The Avedis was also given the name “Zildjian” by him.

With an emphasis on artists, the Zildjian company is now stronger than ever. Many of today’s top drummers use Zildjian cymbals in their setups, and they play anything from heavy metal to soft listening. The takeaway? Quality and innovation are inextricably linked.

7.  Bubble wrap was intended to be wallpaper

Without bubble wrap, where would we be? Without the shock-absorbing protective features of the extremely appealing poppable plastic sheets, Amazon would have to deal with innumerable broken goods returns. However, bubble wrap was never intended for its current application; co-creators Marc Chavannes and Al Fielding created the material in 1957 while attempting to produce textured plastic wallpaper. Because the product wasn’t well-suited for wallpaper, the two spent three years trying to find a marketable application. Finally, in 1960, while on a plane, Chavannes had his “aha!” moment when he noticed that the plane was behaving as if it were “floating on bubbles.” ” moment.

Bubble wrap appears to be used by every shipping business, internet store, and mail order catalog retailer in the world today to assist transport things safely. The story of bubble wrap is another another example of the capacity to spot an opportunity.

8.  IBM left billions on the table over a single decision

MS-history DOS’s is full of twists, turns, and inconsistencies, making it one of the most fascinating digital age path-to-market stories. This much is known: IBM planned to include DRI’s operating system in its digital computers in the early 1980s. However, something went wrong during a meeting, and IBM had to look for new suppliers. Microsoft was aware of a third-party operating system known as Q-DOS (Quick and Dirty Operating System). Bill Gates proposed purchasing and adapting Q-DOS for IBM’s personal computers, and IBM agreed. Microsoft renamed the program MS-DOS after rewriting it (and IBM subsequently rewrote it, which is why both companies maintain copyrights).

Both firms benefited from the arrangement, but Microsoft came out on top due to a single decision made by IBM executives: rather than asking for additional money, Microsoft sought the ability to sell the operating system to other companies. IBM agreed once more, and Microsoft retained control of the MS-DOS license – the same system on which Bill Gates later built Windows and launched a multibillion-dollar corporation that has placed software and hardware in nearly every home in the developed world over the past three decades.

Microsoft’s long-term strategy proved to be tremendously successful, whereas IBM’s short-sightedness resulted in a probable loss of billions in revenue. Of course, there was danger involved; after all, what great opportunity comes without it?

Consider how business impacts history and how history affects business the next time you’re thinking about business issues. How can your company maximize on the chances presented by today’s culture and circumstances? How can you apply what you’ve learned from past entrepreneurs to make your company more effective and profitable?